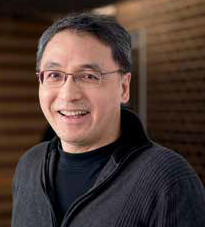 Prof. Chung-Kang Peng, PhD, is Founding Director of the Center for Dynamical Biomarkers at Beth Israel Deaconess Medical Center / Harvard Medical School. During 2012-2014, he was on leave from Harvard and served as the founding Dean of the College of Health Sciences and Technology at National Central University (NCU) in Taiwan. He is currently the K.-T. Li Visiting Chair Professor at NCU, Visiting Chair Professor at National Chiao Tung University in Taiwan, and Visiting Professor at China Academy of  Chinese Medical Sciences in China.

Jointly with the HTC Corporation, Prof. Peng led a team, called Dynamical Biomarkers Group, of physicians, scientists and engineers to compete in the Qualcomm Tricorder XPRIZE competition, the biggest biomedical prize in history. This XPRIZE brought together more than 250 teams with the goal of developing a mobile solution for end-patients to diagnose their health conditions and monitor their vital signs.  The Tricorder name is based on the medical diagnostic device of Star Trek fame.  The Dynamical Biomarkers Group won $1 Million prize money as one of the two finalist teams that won the final awards in April 2017.

Prof. Peng has extensive expertise in statistical physics and its application to the study of physiological measures.  He has been working in this field since he was a graduate student.  Along with fellow collaborators he has developed a number of useful, novel techniques in this area, including:

Prof. Peng is one of the founding members of the PhysioNet (together with Prof. Ary Goldberger, Prof. Roger Mark, Mr. George Moody, Prof. Leon Glass, Prof. Gene Stanley) funded by NIH. PhysioNet is the largest resource for the biomedical signal analysis community, attracting more than 1 million biomedical researchers, engineers, students to visit its website each year. The PhysioNet provides a large collection of physiologic signal databases, as well as software tools for signals processing and analysis.